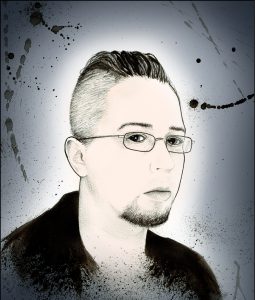 Anthony Richichi is an award-winning painter who has published and exhibited work in galleries throughout New York including the Hyde Collection Museum where he’s been an annually featured Live Painter since 2016. The following year he was the galleries Artist-In-Residence drawing instructor and was honored as Guest Judge in the museum’s 2020 High School Juried Art exhibition. Other gallery work includes a donated portrait of Georgia O’Keeffe hanging on permanent display at Wiawaka in Lake George, NY, the oldest operating women’s art retreat in the United States. The day before the donation Anthony was awarded Best In Show at the 2019 Saratoga Arts “Art In the Park” event.

Recent publishings of his art include his debut children’s book, “Jack”, with Saratoga Springs Publishing. He also has features in 518 Profiles Magazine, Apero Catalogue Fine Arts Collection “Emotion”, The Weird Reader Volume 3, Art Reveal Magazine issue #32 and over two dozen comics from numerous companies including his own, Killustrator Comics. As an illustrator his clients include Aesop’s Fables, Upper Deck, 20th Century Fox, KISS, The X-Files, Bethesda Studios, 377 Films, Vampirella and Dynamite Entertainment. Anthony also works with Adirondack Theatre Festival and Adirondack Film Festival where he is the Tooning In gallery director and curator.

Standing as a board member and artistic designer for Glens Falls based arts organization “Art In the Public Eye”, Anthony is an avid live painter at local events as well as the Art Director of the Glens Falls-based music and arts festival GEMfest, started in 2016. Anthony is also the visual Artist, album designer and bassist/singer of the music group Lock 9.