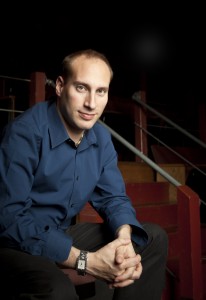 Chad Rabinovitz is the only artist in the United States simultaneously serving as the Producing Artistic Director of two theaters devoted to new and contemporary works:  Adirondack Theatre Festival (Glens Falls, NY) & Bloomington Playwrights Project (Bloomington, IN).  In addition to producing new works, Chad has directed more than 100 productions across the country, focusing primarily on new and contemporary plays and musicals.  He is also the Producer of the Adirondack Film Festival as well a visual arts festival, Arts Fair in the Square.

Under Rabinovitz’s tenure, the Bloomington Playwrights Project has undergone what Bloom Magazine calls “a near miraculous renaissance.”  Taking the helm of a theatre nearing six-figures in debt, in just four years Rabinovitz quintupled its subscribership, erased all debt, vastly expanded its education program, completed a full-building renovation, doubled the operating budget, increased its community partnerships, greatened the company’s national renown, and sold more tickets in a single season than in its 30+ year history.  The BPP reached a new milestone having recently purchased its building.  It has also sold out every single performance of every production for 2 straight years.

The plays Rabinovitz has developed have gone on to productions off-Broadway, at major regional theaters, and to publication in the U.S. and Canada.  For these achievements, Rabinovitz was the recipient of Bloomington’s Manager of the Year Award, the Downtown Revitalization Award, Bloomington’s Attraction of the Year Award, Ivy Tech’s Community Partner Award, and was honored with being on the cover of Bloom Magazine where he’s referred to as “a visionary artistic director, savvy businessman, and inspirational leader.”  He was named one of the 100 Reasons to Love Bloomington and was honored with Bloomington’s 10 Under 40 award as well as Glens Falls’ 20 Under 40 award in the same month.

< Back to All Staff